EVER WONDERED ABOUT GOD

WHO HE IS AND WHY

This is Torque Talk

Blog on Matters that Matter

If there's only matter nothing matters, no reason to trust reason, no objective moral values.

Scroll down on each page to the text 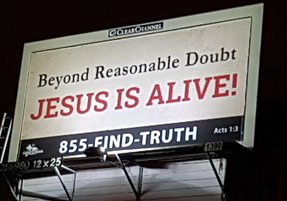 The most unchurched city in the USA

All that the religious leaders of the time needed to do was to find the body of Christ.

That would have stopped Christianity in its tracts.

What is the Proof of the Resurrection

"On that greatest point (the resurrection of Christ) we are not merely asked to have faith. In its favour as a living truth, there exists such overwhelming evidence, positive and negative, factual and circumstantial, that no intelligent jury in the world could fail to bring in the verdict that the resurrection story is true."

Two of the strongest arguments for the resurrection of Christ are;

1. Ten of the original twelve disciples of Christ were prepared to suffer and die for what they believed, for what they have witnessed and were preaching and no authority could stop them. They were killed one by one over the span of a few years but not one stopped talking about what they have seen and heard spreading the Good News of Christ.

2. The explosive growth of the church despite the fact their 'Leader' died on the cross and the scared followers ran away paralyzed by fear. But then became witnesses of the resurrected Christ and their lives changed dramatically and they became bold advocates for what they saw, experienced, and believed.

Ten Reasons to Accept the Resurrection

of Jesus as a Historical Fact

In July of 2005, my life changed. I entered the Lifeway Christian Bookstore in Winston-Salem, North Carolina and read three books that changed my life more than any other book outside the Bible. I discovered Lee Strobel’s The Case for Christ, Josh McDowell’s The New Evidence that Demands a Verdict, and McDowell’s A Ready Defense. I discovered that there are many reasons for accepting the resurrection of Jesus of Nazareth as a historical fact.

Through the years, the evidence has increasingly mounted for the historicity of Jesus’s resurrection. This article will provide 10 of the most fascinating arguments for the resurrection of Jesus of Nazareth. This list is not exhaustive and my dealings with each argument are extremely brief.

Nevertheless, I hope this list will provide a starting point for you to consider the authenticity of Jesus’s resurrection.

1.  The First Eyewitnesses were Women.

The first eyewitnesses of the resurrection were women. All the Gospels note that the first individuals to discover the tomb empty were women. Matthew notes that “After the Sabbath, as the first day of the week was dawning, Mary Magdalene and the other Mary went to view the tomb…The angel told the women, ‘Don’t be afraid, because I know you are looking for Jesus who was crucified. He is not here. For he has risen, just as he said. Come and see the play where he lay” (Matthew 28:1, 5-6). Women were not held in high esteem. In Greco-Roman culture, a woman’s testimony was not admissible in court. In Jewish circles, it took the testimony of two women to equate that of one man.

If one were to invent a story, the last people one would place as the first witnesses would have been women, unless it were otherwise true.

These facts are nearly universally accepted by New Testament scholars, including liberals.

3. Transformation of the Early Disciples.

As noted in the minimal facts, James, the brother of Jesus, was changed from a skeptic to a believer because of the resurrection. James along with his brothers did not believe in Jesus during Jesus’s early ministry (see John 7:5). However, Jesus appeared to James (1 Corinthians 15:3-9) and James became a leader in the early Jerusalem church. His death is recorded by Josephus. Paul is another example of one who was completely transformed by the resurrection of Jesus. Paul had been a persecutor of the church. After witnessing the risen Jesus, Paul became a proclaimer for the church.

4. Embarrassing Details of the Resurrection.

Historically speaking, embarrassing details add veracity to a historical claim. The fact that women were the first witnesses, that a member of the Sanhedrin (the same Sanhedrin that executed Jesus) had to give Jesus a proper burial, and that the disciples were fearful and fled all serve as embarrassing factors for the resurrection account.

5. Willingness to Die for What Was Known.

Many people will die for what they believe to be true. But no one will die for something they erroneously invented. The disciples knew if they were telling the truth. Yet, one finds that the disciples were willing to die for what they knew to be true. Stephen died by stoning (Acts 7:54-60), James of Zebedee died by the sword at the hands of Herod (Acts 12:2), James the brother of Jesus died, and Peter and Paul died at the hands of Nero.

Douglas Groothuis notes that circumstantial evidence for the historicity of the resurrection is “namely, the practice of the early church in observing baptism, the Lord’s Supper, and Sunday worship.” Baptism is based upon the analogy of Jesus’s death, burial, and resurrection. The Lord’s Supper is a symbol of Christ’s sacrificial death. In addition, it is quite odd that faithful Jews would move their worship from a Friday evening into Saturday to a Sunday morning unless something major had occurred on a Sunday morning. The major Sunday morning event was Jesus’s resurrection.

J. Warner Wallace has noted in his lectures and books that when a conspiracy is formed, three motivating factors are behinds such a move—power, greed, and/or lust. The disciples would hold no power behind claiming the resurrection as history. They were running around while often being threatened by the Jewish and Roman authorities. As far as greed, they taught that one should not desire earthly possessions, but spiritual ones. Lust was not a factor, either. They taught celibacy before marriage and marital fidelity after marriage. In fact, N. T. Wright notes in his classic book, The Resurrection of the Son of God, that the disciples had no theological motivation behind claiming that Jesus had risen from the dead as they were anticipating a military hero and a final resurrection at the end of time. What motivating factors existed for these disciples to invent such a story? None! The only reason the disciples taught the resurrection of Jesus was because Jesus’s resurrection had occurred.

9.  Enemy Attestation of the Resurrection.

All my life I've been searching

for that crazy missing part

and with One Touch

You just rolled away the stone that held my heart

And now I see that the answer was as easy

as just asking You in

Your Love Broke Through